I’m having the nicest day, not entirely sure why.  I think as for many, January has been proving a bit of a challenge but I just went downstairs to make a coffee and for a brief moment the sun came out, suddenly I remembered why we have so much glass in this house as it streamed through, highlighting my dirty windows but making me smile.  I’m also listening to Simon & Garfunkel whilst I sew, I really feel in the mood for harmonies and as there’s no-one here but me I can sing along to my heart’s content. 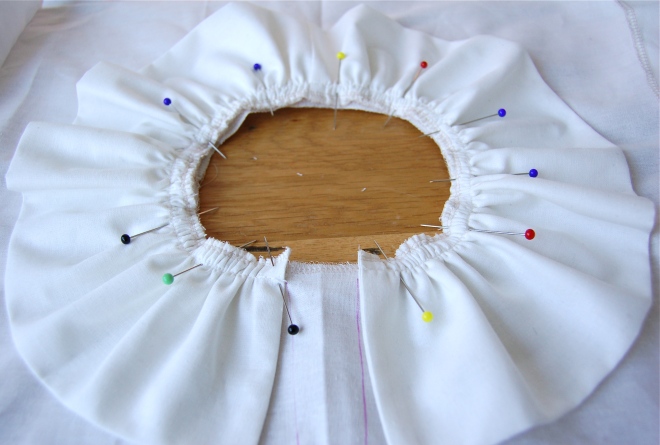 And so, we had a letter from school a while ago telling us that to accompany the children’s learning could we please dress them in Tudor costume for a day, oh and if we like we can buy them an outfit from a recommended site for £30 (oddly, the same company that are coming in to teach the kids more about living in that period).  I then moaned on twitter about providing a costume to be worn for one day and about the expectation from some that because I used to be a Costume Designer that it’s easy for me to whip one up in a moment.  It doesn’t really work like that, I find it quite difficult not to over think these things and make full on mini period costumes that take me hours and along with the cost of fabrics this just doesn’t scale.  Then I stopped moaning and decided to get on with it and in the end rather enjoyed myself!

I even made an outfit for a friend’s daughter (I do think these things are especially hard on parents who can’t sew or have more than 1 child in the age group). 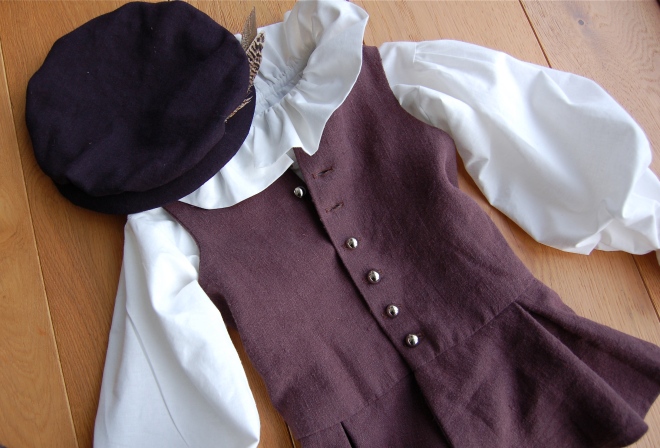 For F, I made an outfit that will also double as a Pirate costume afterwards.  I did cut the doublet pattern correctly for the period but obviously stitched it on the machine and used fabrics from my stash.  F is most concerned that I’ve chased a pheasant around the garden and stolen some feathers for the hat, he’s not convinced they are ones we’ve picked up on our walks.

He also took the posing for camera this morning quite seriously, this is his, “Oh, look!  The Vikings are coming” pose.  I have no idea why Vikings are involved, he’s 5. 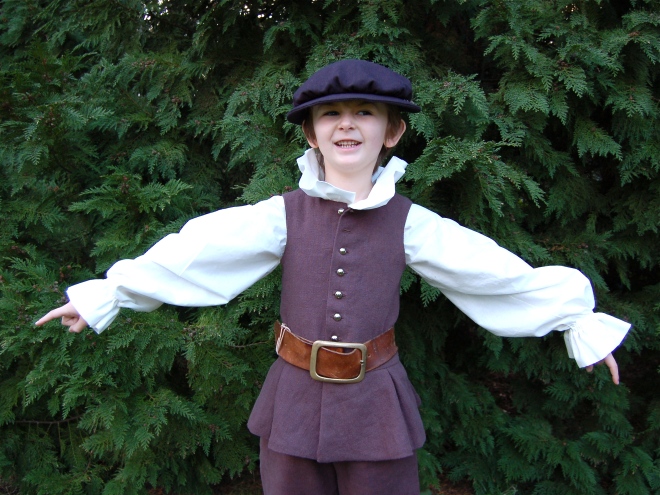 I’m thinking the shirt is very New Romantic, I hear ‘Stand and Deliver’ in my head each time I look at it.  I may have gone a little overboard in the fullness of the sleeves.

Obviously, I could have cobbled something together quickly, or bought on-line but I decided it would be good to practice my skills plus I did buy his last costume from Tesco’s (a Shepherd’s outfit for £8 and you even got a sheep!) and I did really enjoy myself, more importantly he was very happy so that makes it worth it.

Back to S & G and sewing I think, make the most of my one full day at home child free, much as I love my boys it’s so nice to get a little time to myself 🙂