There is another alcove in my bedroom that I didn’t show in the last post, it’s quite a difficult space as it doesn’t get a lot of natural light and it’s an awkward shape due to it being where the chimney breast runs up the house. 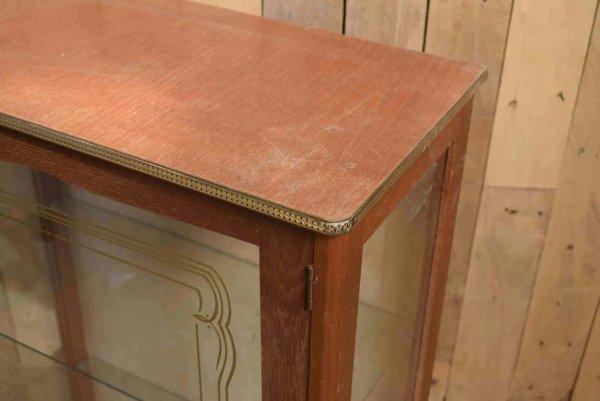 After a lot of thought, I fell in love with the idea of a glass display cabinet, ideally full of rows of my shoes. Yes, shoes again. I have a lot of them. To be fair I’ve been collecting them for years and years it’s very rare these days that I spend any money on myself, but the joy of my liking retro style heals is they never go out of fashion (as they are rarely in fashion!). 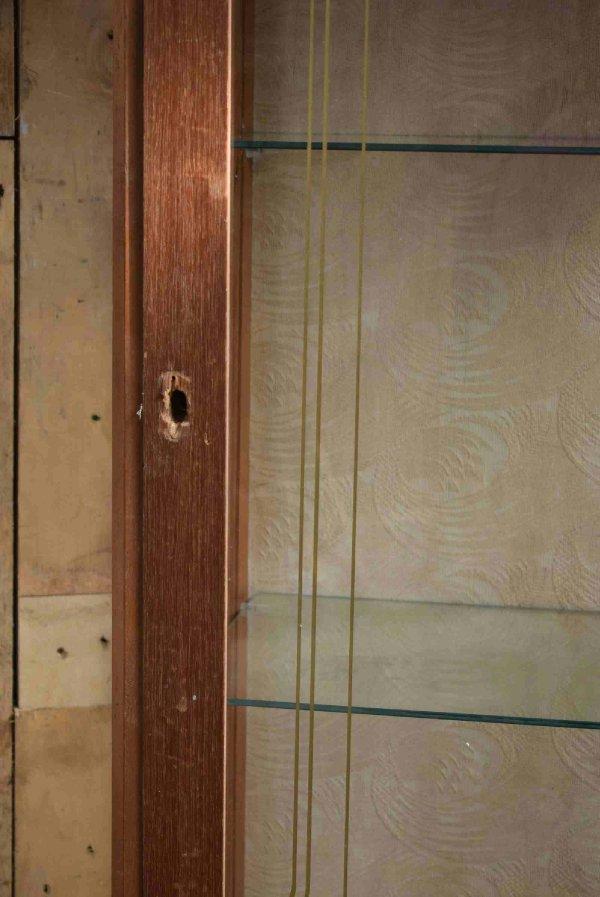 I spent a lot of time hunting on eBay for the perfect piece at the right price. The big problem is obviously no-one is willing to deliver glass so I got very excited when I found a cabinet on a charity auction site with postage costs and at a very reasonable price. It was in a bit of a state so was going to be a gamble, but the low price meant it wouldn’t be disastrous if it didn’t work out.

It was delivered by Parcelforce (I’m not kidding!) wrapped in a lot of bubble wrap and cardboard but survived intact. The wrapping was genius, if I remember correctly.

The first job was to try and revive the very scratched woodwork. For this, I went old school, and rubbed it down with an oil and vinegar mix and wow!

What a difference it made. It was an almost miraculous recovery. It was so long ago that I’m not fully sure, but I think I then gave it two coats of Danish Oil before hunting down some old lock escutcheons on eBay. They were very cheap and once they arrived, I  liked the bakelite one best.

As the door stayed shut nicely, I  just added a modern brass rabbit knob instead of trying to find a replacement key for the lock….just look at how pretty the wood looks in comparison to the top eBay sale photos. 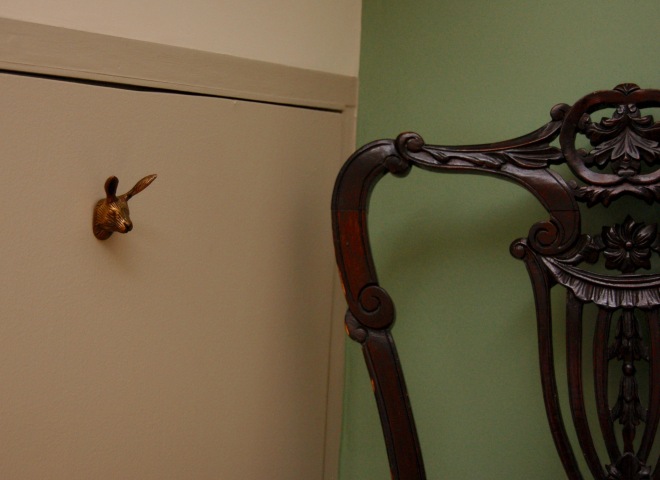 There is a matching rabbit used as a knob on the eaves cover just to the left. I used up all my leftover brass furniture handles and knobs on the eaves doors, so it’s quite nice as they are mostly mismatched, which I like; it was coincidence these two ended up near each other. 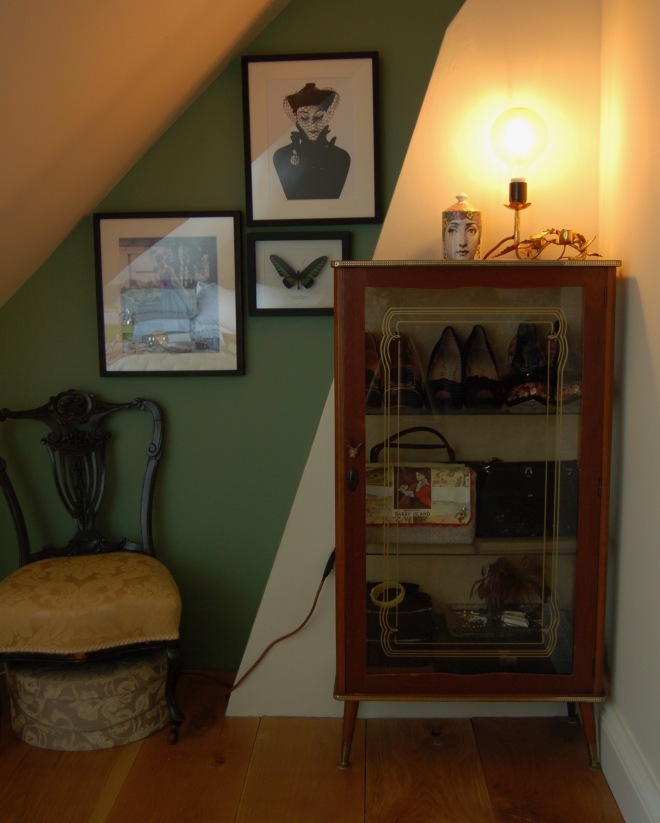 I love this piece of furniture. It cost very little and works really well to fill the dark space as it allows light to pass through, is quite shallow in depth and, most importantly, I get to put pretty things on display!

The light on top came from Graham and Green and the gorgeous candle which smells amazing as well as being beautiful was a Christmas present (it’s by Fornasetti).

These were the original pictures in the space, but I’d promised myself that one treat when the room was complete would be buying new images as pay off for all the hard work (these ones have gone somewhere else – the wedding photo was my 18th birthday gift from my Mum, she found it in an antique shop and knew I’d like it, the tapestry was stitched by my Gran and used to be in my bedroom when I was a kid).

The two framed photos are from King and McGaw and I absolutely LOVE them. They are both vintage Vogue photos. 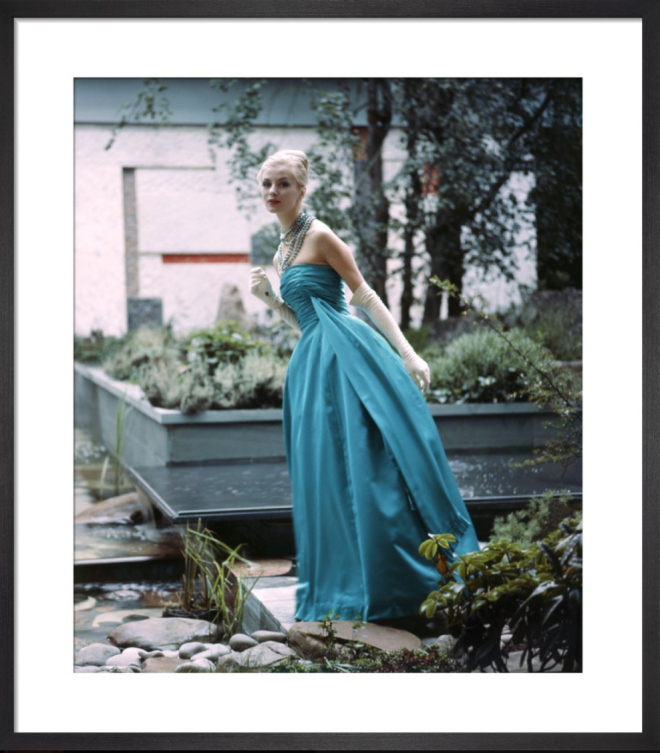 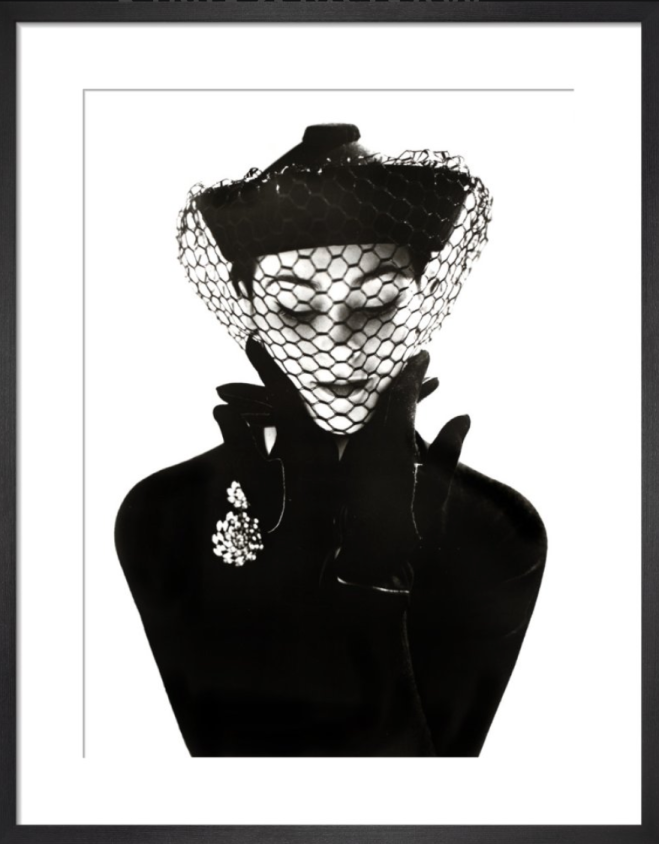 and Felt and velvet mandarin hat by John French. They would really be nicer as larger images but I had to stay smaller to fit in the space.

The final thing to go on the wall is a little frame with some of my vintage brooches on.

It’s just a cheap photo frame from Sainsbury’s taken apart and a chunk of cork board covered with white linen put back in where the glass should be. It allows me to display my brooches but also take them down easily to wear and the sparkle from the stones is really nice in the darkened corner.